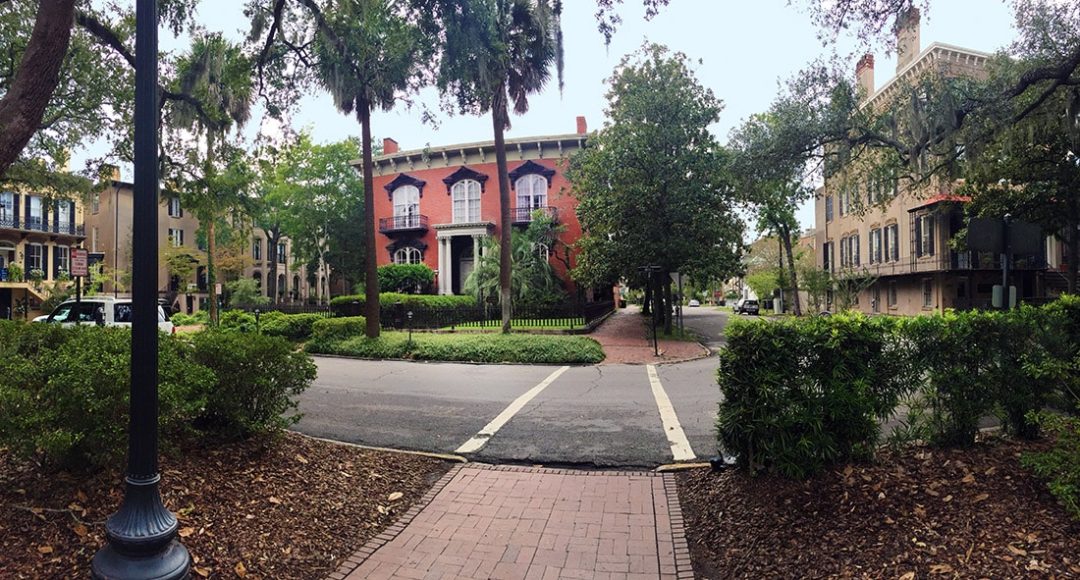 Savannah has become a vacation mecca, famous for her history, architecture, and 22 park-like squares. Perhaps the most picturesque, and certainly most famous, is Monterey Square.

Unique in Georgia for surviving Sherman’s March, Savannah’s original buildings, trees, and heritage, were spared the fires of Sherman’s Revenge in 1864.

Had events gone differently, and Savannah burned, we would surely have lost the beauty and splendor of Monterey Square. 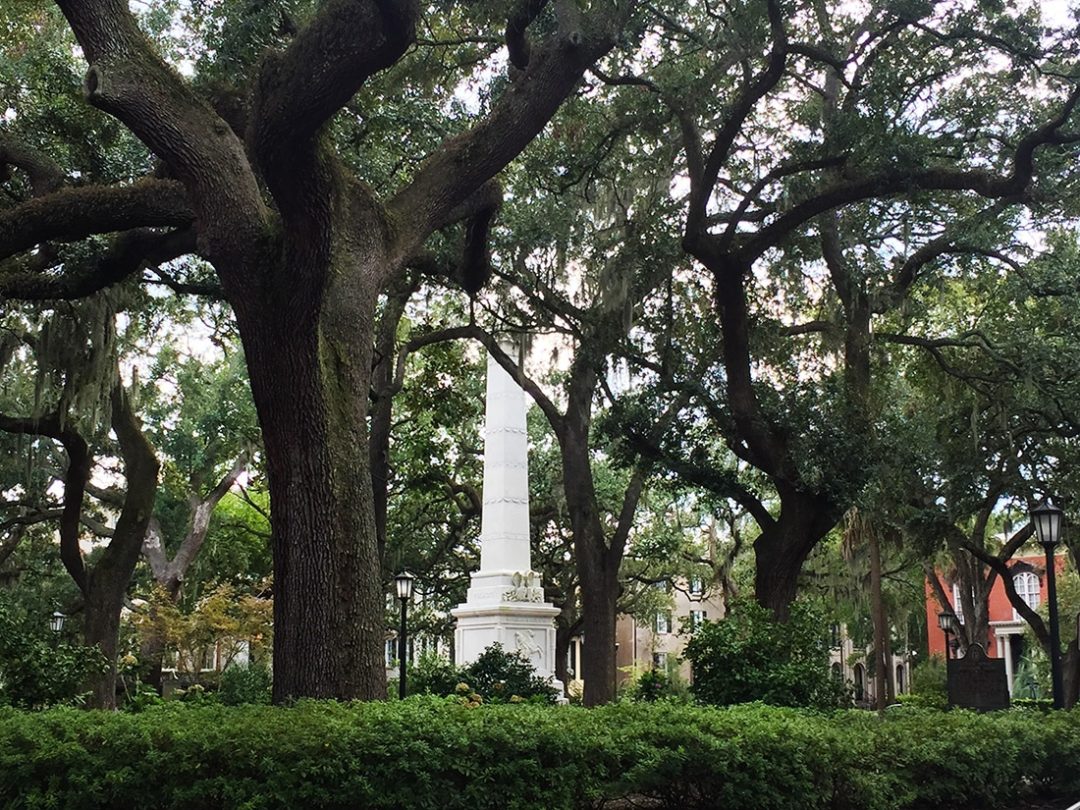 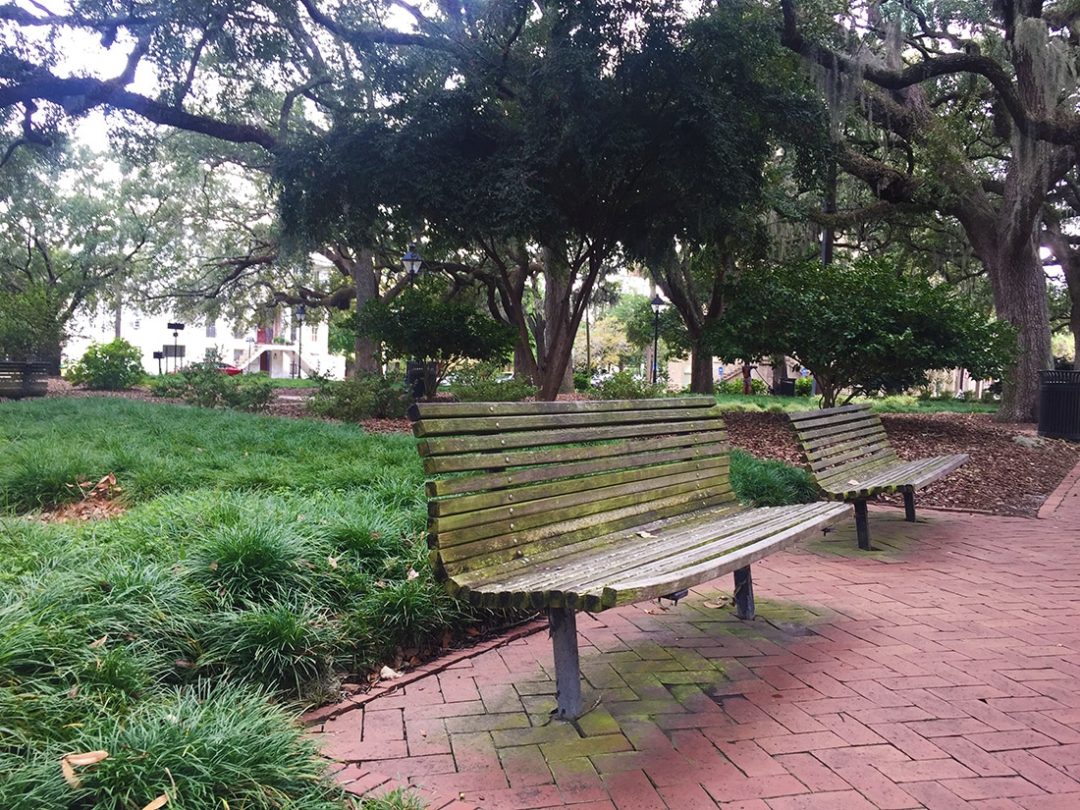 The Square was laid out in 1847, and named to commemorate the capture of Monterey Mexico by the US Army under command of General Zachary Taylor on May 24th, 1846.

Zachary Taylor, known as “Old Rough and Ready”, was elected 12th President of the United States as a war hero in 1849, but died in office, serving only sixteen months.

Located on Bull Street, the square is bordered on the north by Taylor Street, and the south on Gordon Street. 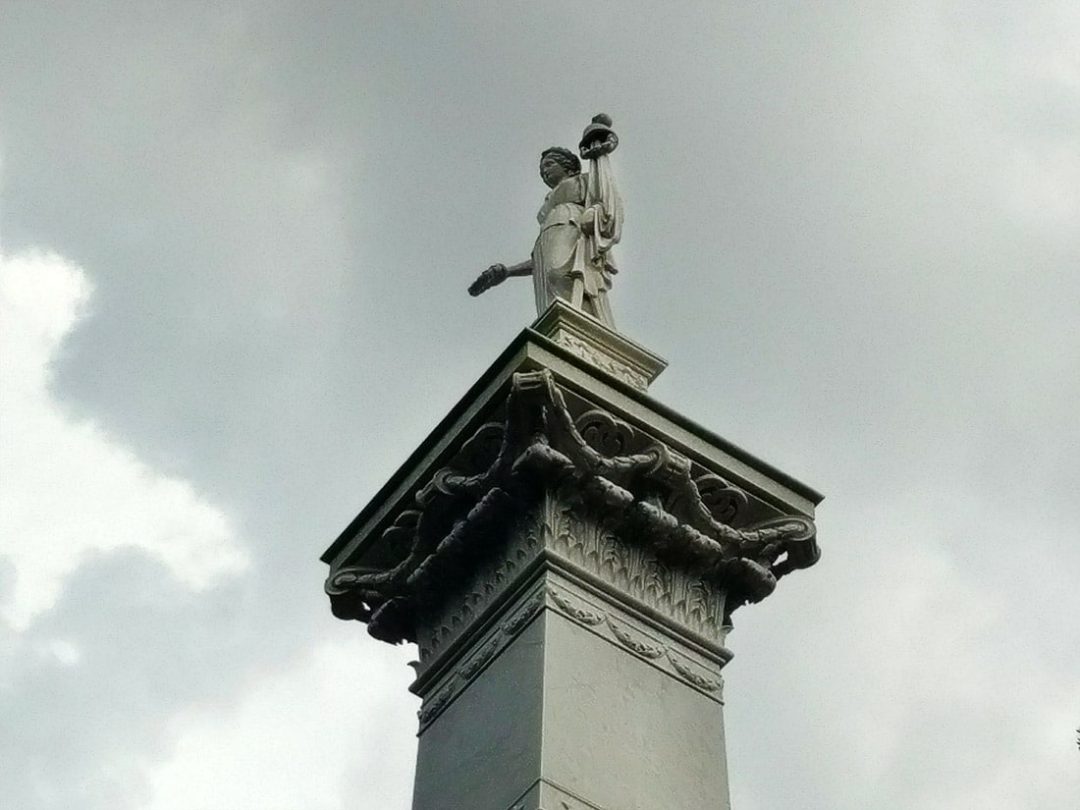 Nearly every building facing Monterey Square is original, beautiful, and historic. But right smack in the center of the square is an imposing obelisk, 55 feet tall, made of Italian marble and granite.

The monument, called at the time “one of the most elegant memorials in America”, was conceived, financed, designed, and constructed in honor of a nobleman from Poland, who died in Savannah practically a super hero. 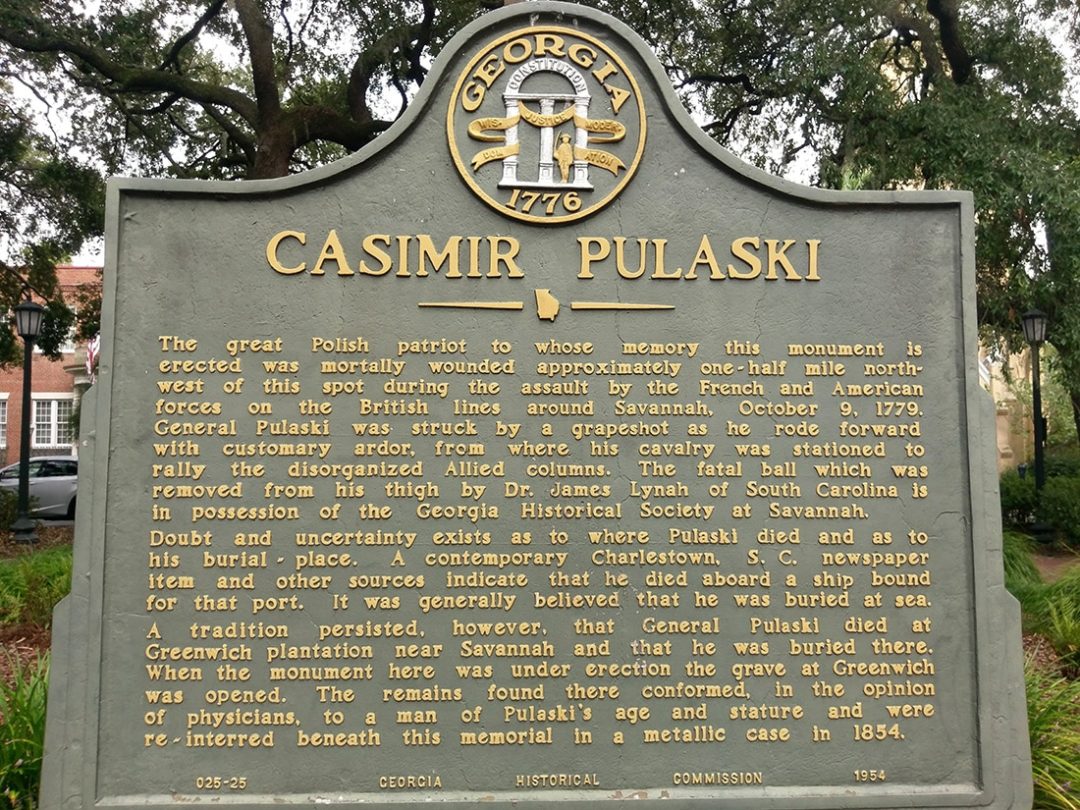 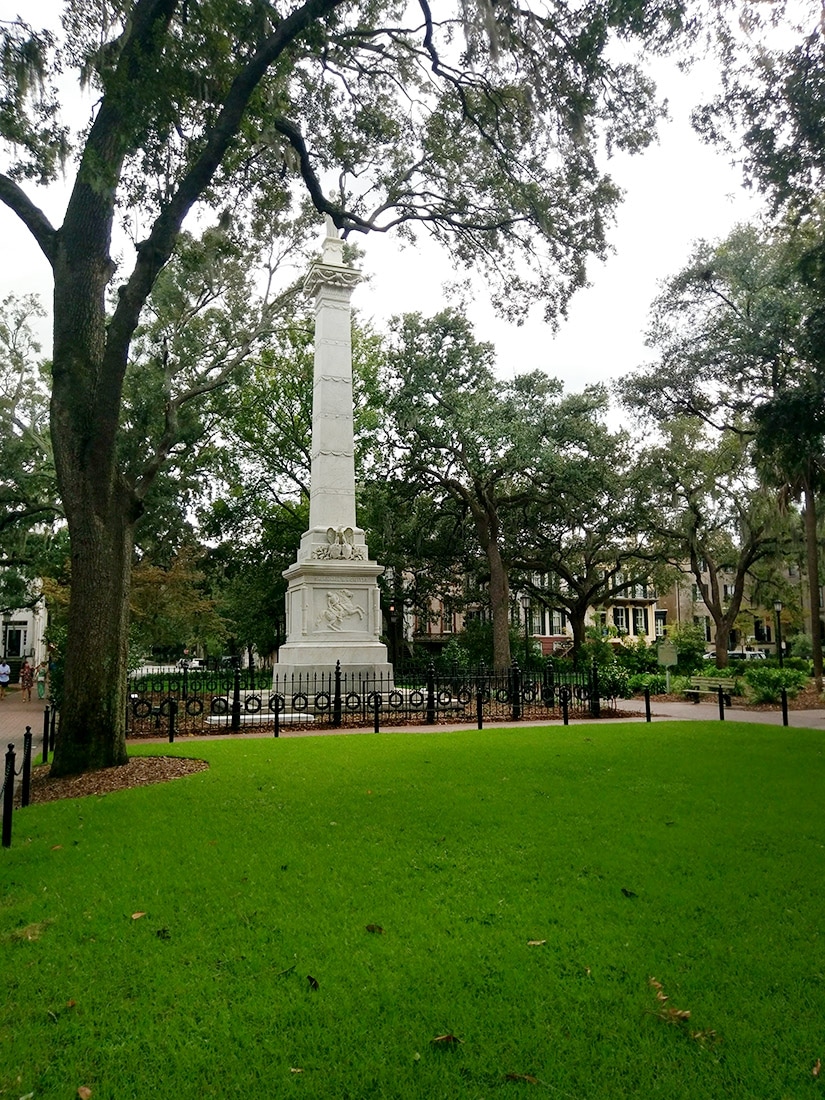 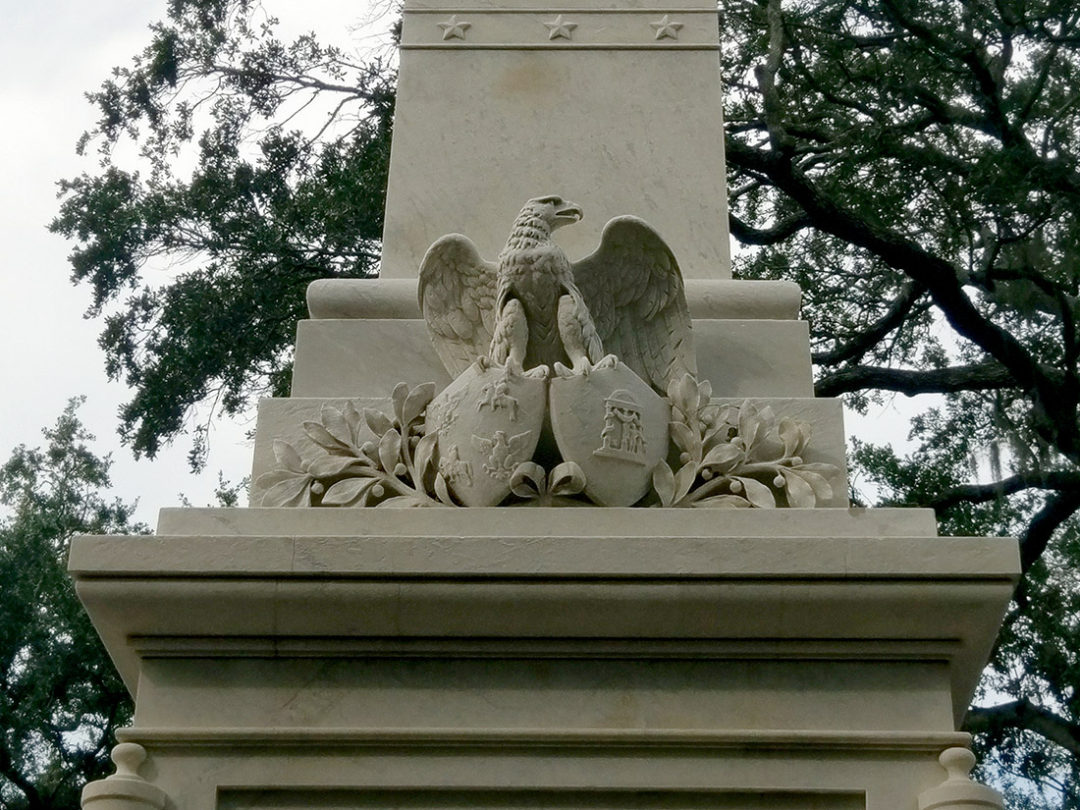 Born in Warsaw Poland to nobility in 1745, Casimir Pulaski distinguished himself in politics.

Taking up the causes of freedom and liberty, he went on to command military forces to fight against domination of Poland by Russia. When the efforts failed, he was forced to flee his home country.

At the request of none other than Benjamin Franklin, Pulaski emigrated to our colonies to aid the “Americans” in our own struggle for freedom from Britain in the Revolutionary War.

Casimir proved a valuable, capable ally, and served the Continental Army with valor, and is even credited with saving the life of George Washington.

He was promoted to General, created his own cavalry brigade, and so reformed, and modernized our own cavalry, that he became known as the “father of the American cavalry.”

On October 9, 1779, Gen. Pulaski was shot and mortally wounded at the Battle of Savannah, charging into enemy fire in an attempt to rally disorganized Allied forces.

Casimir Pulaski was a hero who died at 34 years old fighting for freedom, no matter for whose lands.

He was granted honorary U.S. Citizenship (only seven other people in history have been awarded the honor), given this memorial in Monterey Square, and even nearby Fort Pulaski was named after him.

Where is Casimir Pulaski’s Body?

The fatal shot, a “grapeshot”, was removed from his thigh by South Carolina Doctor James Lynah.

Reputable newspapers of the day indicate that he died on a ship bound for Charleston, SC, and that he was probably buried at sea.

But legends and rumors persist that Pulaski died at nearby Greenwich Plantation, and was buried there.

Seventy-five years later, while the Pulaski Monument in Monterey Square was erected, the grave site where Gen. Pulaski was supposedly buried was exhumed.

A body was indeed found, and the physicians assembled to examine it agreed, the body was of the approximate age and height of the famous hero.

They re-interred the body in a metallic case underneath the monument in 1854.

So where is the body of General Casimir Pulaski? 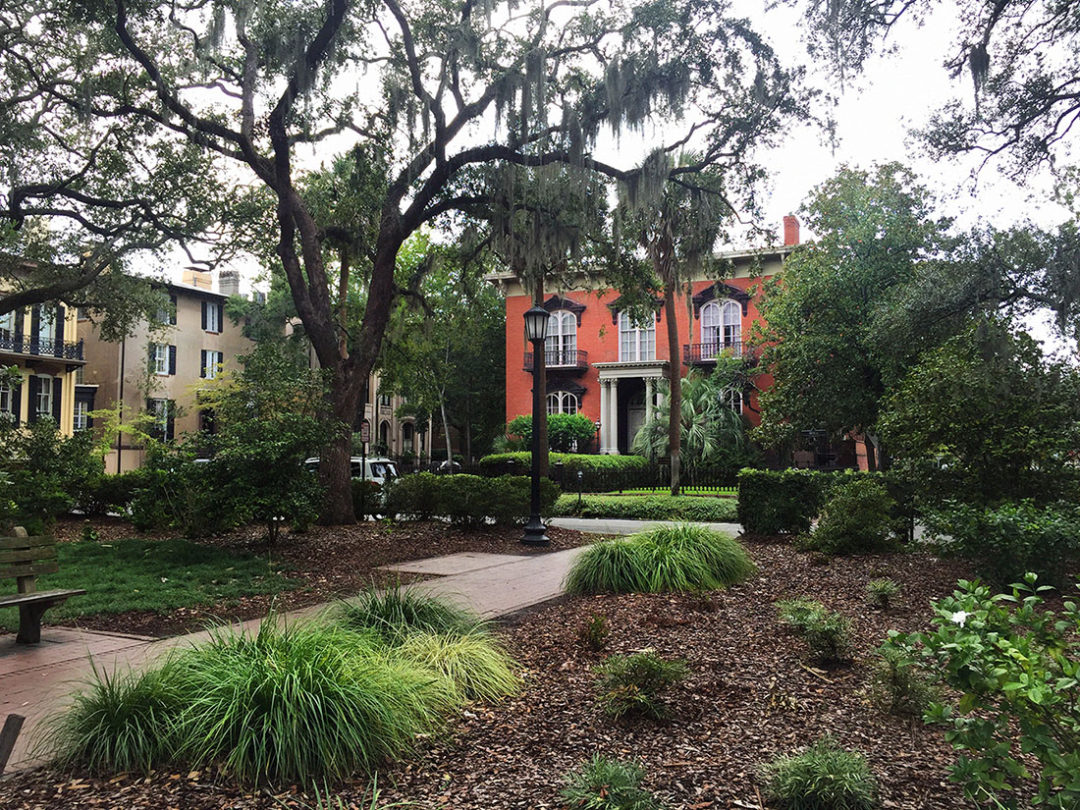 Probably the most famous building in Savannah, The Mercer House, now the Mercer-Williams House, stands at 429 Bull Street on the west side of Monterey Square.

Designed by John S. Norris for Gen. Hugh Mercer, construction began in 1860, but was completely interrupted by the Civil War, sitting partially constructed until its completion in 1868.

The house survived the next hundred years mostly intact, until it’s most famous owner Jim Williams, bought the vacant building in 1969 and restored it to the glory you see today.

Midnight in the Garden of Good and Evil

Mercer House, and Monterey Square are major characters in the 1994 book by John Berendt, and the 1997 film of the same name.

The controversy and the trial that followed form the basis of the book, but the city of Savannah was the real star.

Jim Williams was an antiques dealer and “historical conservator”, as well as a socialite in Savannah during the 1970’s and 1980’s. Invitations to parties at Mercer House were coveted by all of Savannah, even, and maybe especially, by his enemies.

A bachelor, Mr. Williams held two major Christmas parties at Mercer House every year.
Both Christmas parties were invitation only, but the “Main Party” was for showing off, currying political favor, dispensing disfavor, and was open to invited Savannah elites.

The “second party” was more secretive, for bachelors only, and much fewer made the list.

In fact, the second party was the one Jim actually enjoyed and looked forward to, and the guests were other gay men in Savannah.

Directly across Monterey Square from the Mercer-Williams House, is Mickve Israel Synagogue, built in 1878 in the Gothic style.

One of a very few synagogues built in the Gothic style, the property has been placed on the National Register of Historic Places.

The Congregation Mickve Israel was founded in Savannah when 42 jews mainly of Spanish-Portuguese descent landed here aboard the ship The William and Sarah, on July 11, 1733.

Among the belongings of the immigrants was a copy of the Torah, which has survived to this day and is still used at Mickve Israel for very special occasions.

The Synagogue is impressive to behold from outside, but the congregation does offer tours inside of the sanctuary, and of the museum next door, on all days except Jewish holidays. 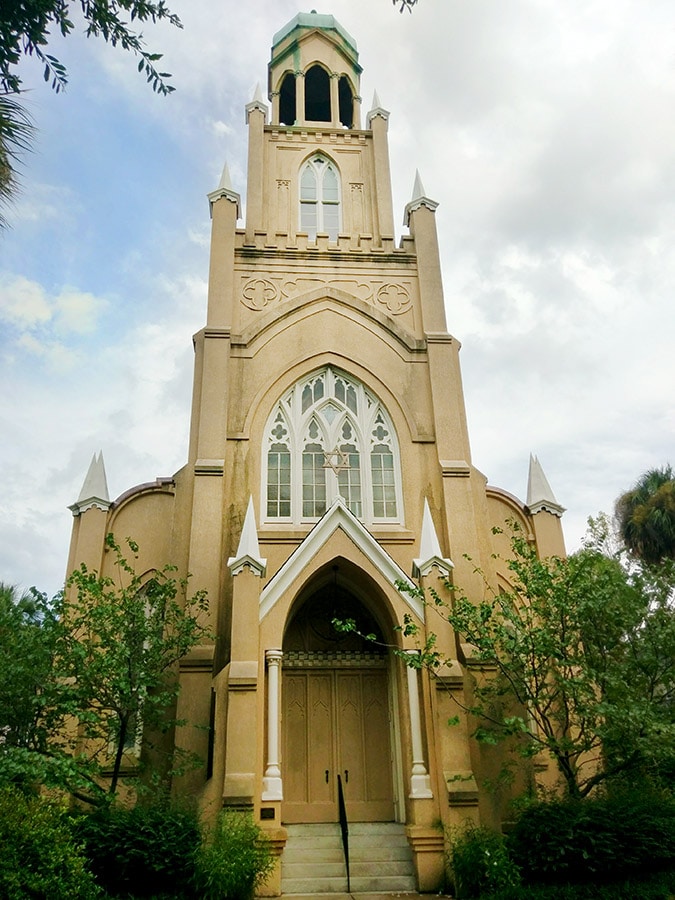 Vacation in Savannah on Taylor Street in the middle of history

Among the great homes and buildings of the Monterey Square area is 28 E. Taylor Street.

28 E Taylor Street is one of five side by side houses built in 1852 for David Lopez Cohen, who likely made the short walk to worship at the Mickve Israel Synagogue on Monterey Square across from the Mercer House.

Savannah Dream Vacations is so proud to offer private vacation rentals in Savannah on each floor of 28 East Taylor Street to our guests.

The East Taylor Garden Home is at street level, and features original beams in the ceiling, original brick on the walls, and the largest fireplace of all the building’s four floors, which we believe was originally for cooking.

On display in the E. Taylor garden home are two bottles from the building’s history, which were unearthed during renovation!

After wandering Monterey Square, and historic Savannah, walk to the private courtyard out back for a glass of wine or coffee, and reflect on your day.

The Taylor Second Floor Savannah vacation rental features views of Savannah from front and back windows, and has a private balcony perfect for reflection, or romance. A full kitchen and bathroom, a living room, and one bedroom complete this 1,000 square foot vacation rental in the middle of it all!

Our Taylor Parlor Savannah vacation rental is newly renovated, with views of the north and south of the historic district. The décor will charm and you’ll relax on your private balcony out back.

The views of the city are breathtaking from your windows or private balcony, especially the towering steeples of the historic cathedral to the northeast.

At Savannah Dream Vacations, your Savannah vacation rental is part of your Savannah experience, not just a place to throw your luggage and rest your head.

Ready to experience all that Savannah has to offer?

Call us, contact us, or book now! We can’t wait to show you the Savannah Dream Vacations difference!