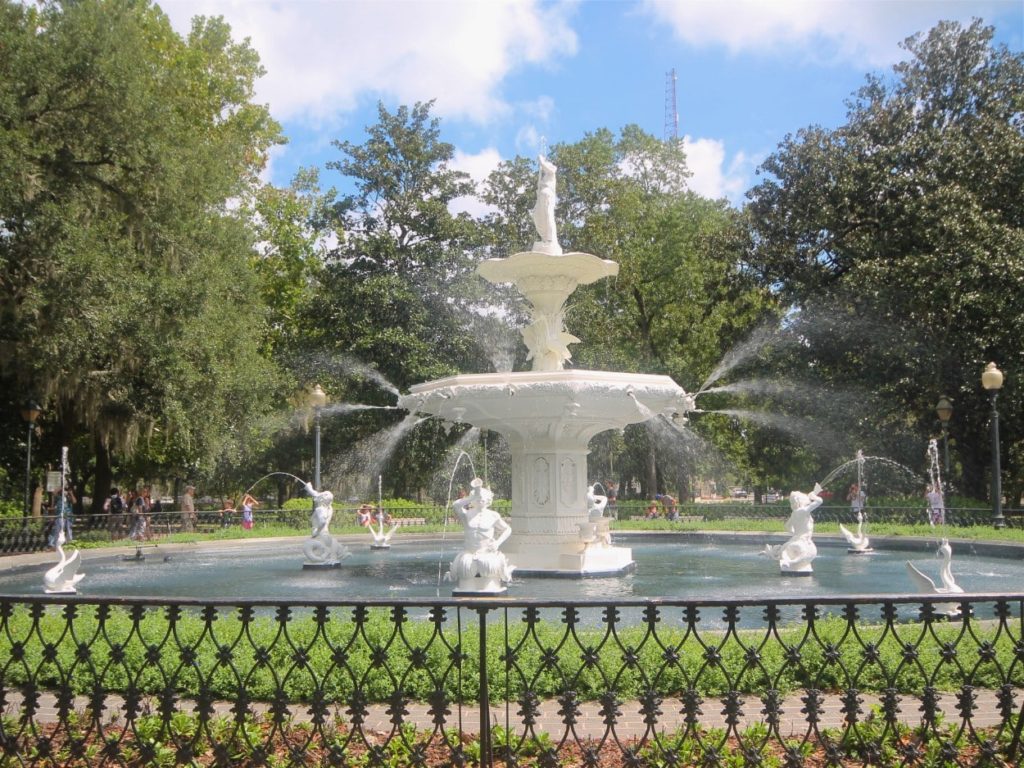 One of Savannah’s best features is our squares.

For instance, Savannah’s Forsyth Park is one of the city’s crown jewels, spacious, shaded, beautiful.
But above all, Packed with history!

It’s Savannah’s version of “Central Park”.
It’s a great place to throw a frisbee with the dogs or kids.
Have a nice picnic. Or tie up your hammocks to the shaded oaks and just relax.

Play tennis on the hard courts, or join a pick-up game on the basketball courts.
Get in your morning jog; Forsyth’s outer loop is nearly a perfect mile.

Bordered by some of Savannah’s Great Houses, a walk of the outer loop showcases some of the city’s best architecture.

Named after John Forsyth, the Governor of Georgia who had just died in 1841.
The park began as just 10 wooded acres set aside to become Savannah’s first recreational park.
After that, the park was improved and expanded to another 20 acres in 1853.

Explore the 30 acres of Forsyth Park’s interior, and you’ll see why locals and visitors flock here every day.

Check out some things in Forsyth Park during your Savannah dream vacation:

Surrounded by oaks dripping in Spanish moss, the gleaming white fountain setting is like something out of a fairy-tale.

It was originally placed to be the focal point in a gardened park called “Forsyth Place”.
The fountain sits in the direct path of Bull Street, where it continues through the park.

The placement of the fountain creates a perfect line of sight from both the northern boundary of Forsyth Park at Gaston Street.
And the southern border of the park at Park Avenue.

Running 24 hours a day, the two-tiered fountain lights up gloriously after dark.

Adorned at the top by the lady with her staff, above wading cranes, the spray creates soothing sounds and cooling mists.

History of the Forsyth Fountain

The centerpiece and stunningly beautiful backdrop of Savannah’s Forsyth Park is; the historic fountain.
In 1858, 18 years after founding the Fountain was installed.

What many people do not know, is that Savannah’s most famous fountain came from a mail-order catalog!
Ordered from Janes, Beebe & Co’s Illustrated Catalogue of Ornamental Iron Work
at a cost of $2,200 (or $65,000 today), our famous fountain was known as Model No 5!

Things to do in Savannah: Stroll through Forsyth Park